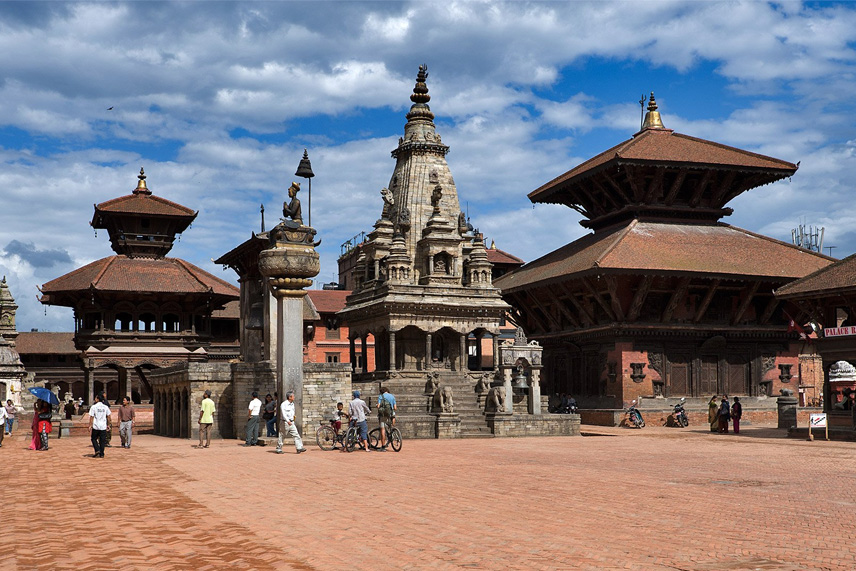 Bhaktapur Durbar Square, renowned for its antique heritages from the 15th century displays the masterwork of metal, wood, and stone arts. It in fact exhibits the vividness of very old era. Exploring around the calm Durbar Square and observing the amazing art and architecture of prehistoric times will captivate anyone. 55 Window Palace is the major appeal of the Bhaktapur Durbar square constructed by King Bhupatindra Malla. The 55 Window Palace used to be the dwelling set for royal family. By its name, it has beautifully carved 55 windows and peacock windows which are in fact are the architectural treasure. Now, it has been turned into a national gallery depicting fine craftsmanship.

National gallery within 55 window palace is an appealing place to visit. The gallery contains set of paintings, historical manuscripts, Thangkas and more.Golden gate is the access point to enter the main square of the fifty-five windows palace. This gate is well-known for its superb gold plated metalwork.Lion’s gate is another attraction of the Durbar Square with the enormous gate protected by two lion statues on both sides of the gate. Alongside the gate, there are statues of Lord Shiva and goddess Ugrachandi.

The word ‘Nyatapola’ means five storied ‘in Newari language. Built in pagoda style, Nyatapola Temple is dedicated to goddess Laxmi. This temple is constructed to perfection of artistic beauty.King Bhupatindra Malla was one the best known kings of Bhaktapur in the past days. The king played a vital role in producing stirring art and architecture in Bhaktapur. The bronze statue is built with folded hands on the top of the pillar and is one of the highlights of Bhaktapur Durbar Square.

Dattatreya square also holds a lot of historic monuments and artistic shrines. It is believed that this three-storied shrine is constructed from a timber of a single tree. The terrific fact about this temple is it has resisted several natural calamities since ages.

There are many other temples spread in Durbar Square devoted to a variety of deities. Besides the religious significance these temples, it also has great architectural worth.Vatsala Temple, Mini Pashupatinath Temple, Bhairav Nath Temple, Badrinath temple, Rameshwor temple and a lot of other temples around the Durbar square allures anyone with its intricate artwork.

Strolling around these antique heritages brings a kind of calmness. There are local restaurants presenting local Newari and a range of cuisines. ‘Juju Dhau’ which means king of curds is something you should not miss .

Walkmountain is a legally, registered trek company, and tour company in Nepal, since our establishment in 2006.We have been offering premium travel service among the trekking and travel enthusiast from all around. We are connecting and arranging the best of tours and trekking adventures across Nepal.